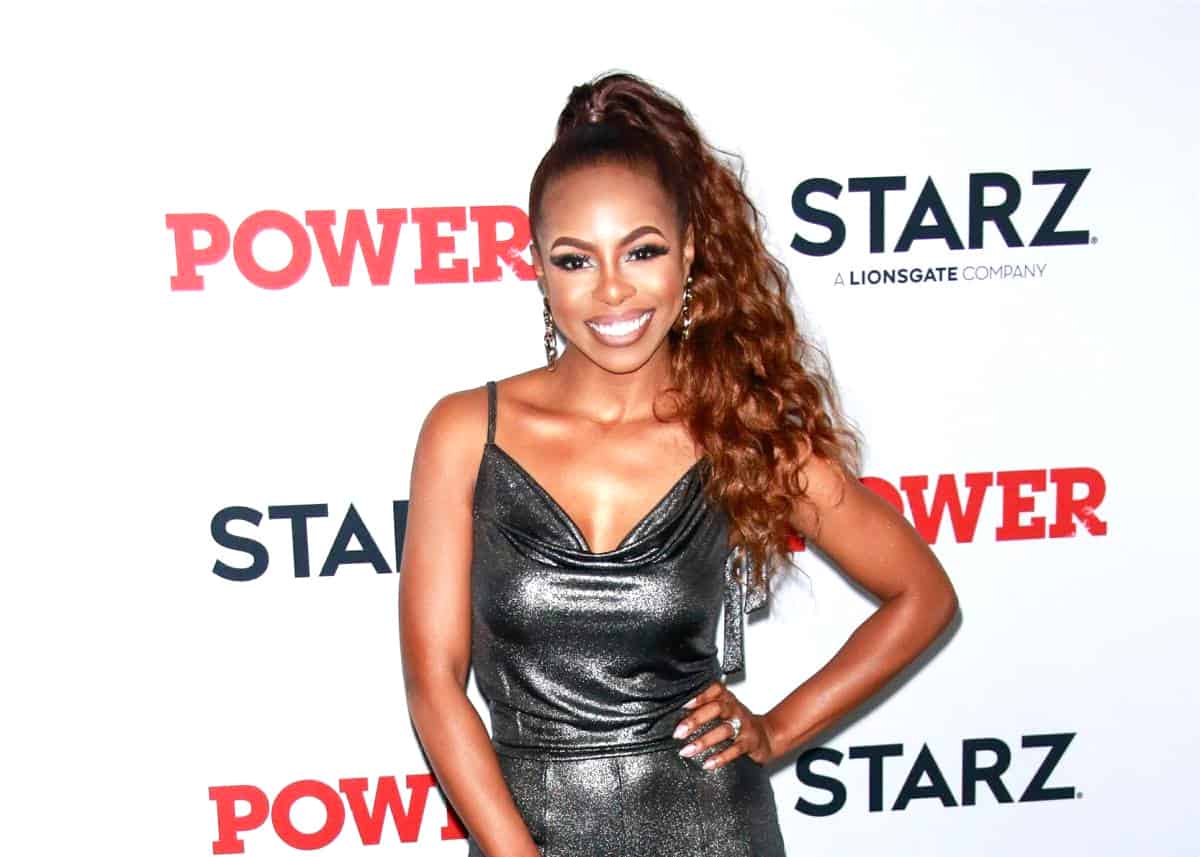 Candiace Dillard-Bassett took to Twitter amid Sunday night’s season seven premiere of The Real Housewives of Potomac, where she complained about the editing of the show and addressed certain topics that had been discussed.

In addition to slamming the editing team for their apparent “creativity” and reacting to Gizelle Bryant‘s “scheme” against her husband, Chris Bassett, Candiace opened up about the recent happenings within her marriage, including her and Chris’ fertility journey.

“Shout out to our post team. The creativity and editing are top tier,” Candiace tweeted on October 9.

But she was immediately called out by a fan who tagged Real Housewives exec Andy Cohen in a message about her job at Bravo.

“Maybe we should talk to [Andy Cohen] and tell him how unhappy you are with your job. Maybe you don’t need [Housewives] anymore since your career as a successful recording artist can cover your living expenses,” the fan had stated.

“Maybe you should clock in tomorrow and mind your business,” Candiace fired back. 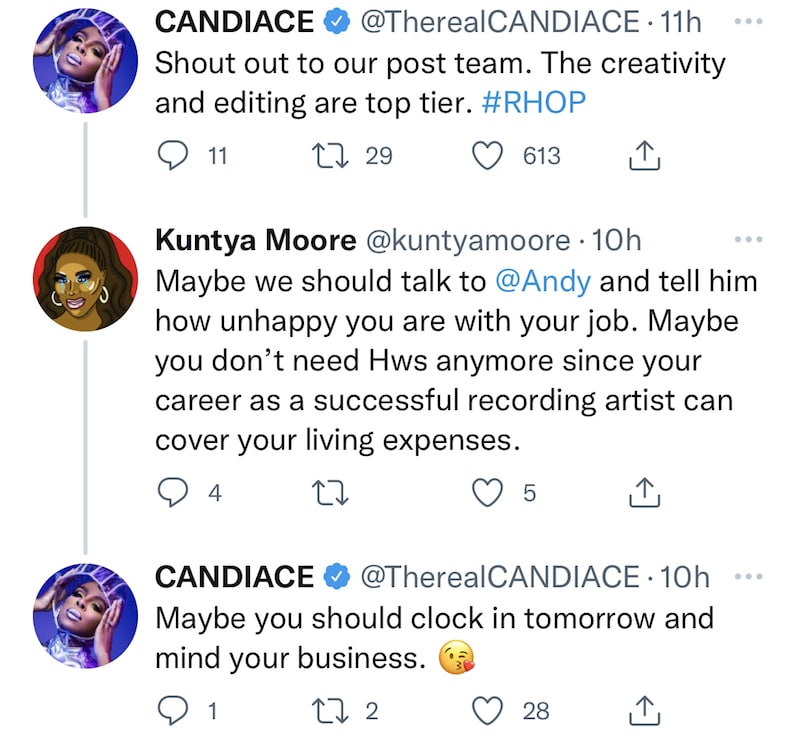 Another RHOP viewer mentioned how Gizelle was “breaking her neck to say hello to Chris,” which prompted someone else to note that Chris “didn’t seem so enthused.”

“Makes me wonder if he knew about the scheme during that scene,” the second fan shared, giving a nod to Gizelle’s claims of inappropriate behavior against Candiace’s husband.

“We didn’t yet,” Candiace confirmed. 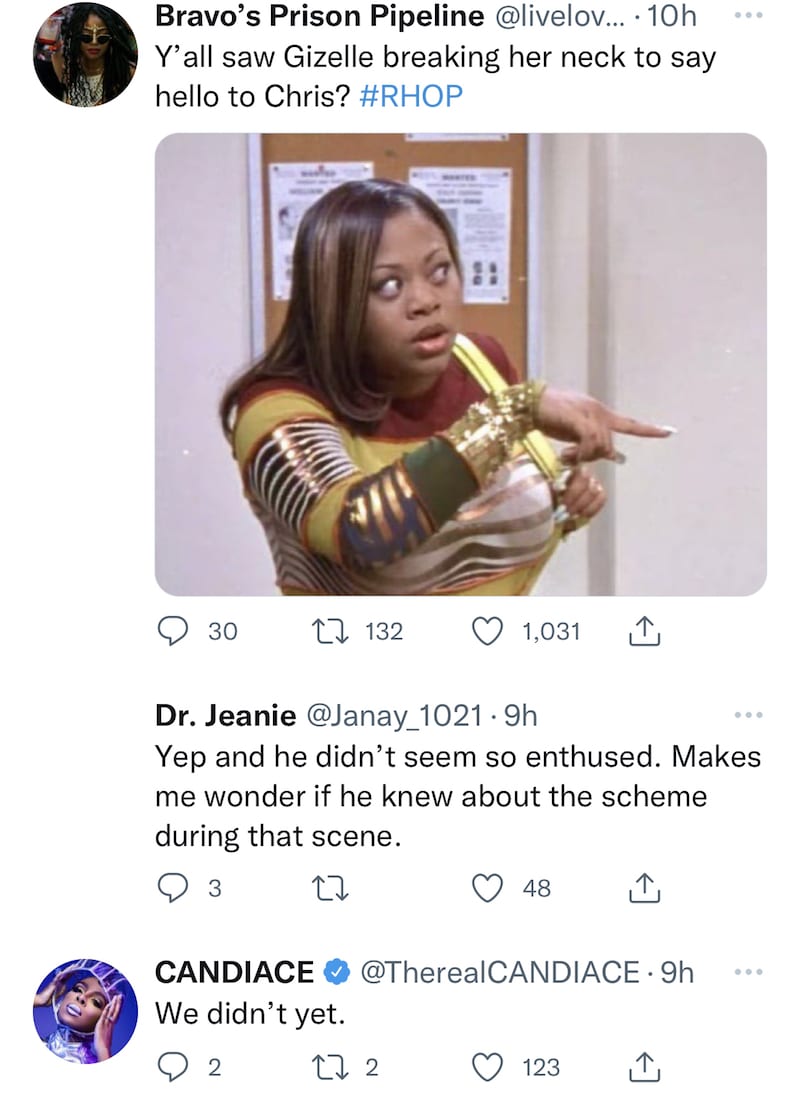 In another message to her fans and followers, Candiace said that when it comes to starting a family with her husband, his career in nightlife is worrisome.

“[Chris Bassett]’s work schedule is a HUGE point of contention because when I think about becoming a parent, it worries me to think that the industry that he works in could keep him away,” she admitted. “Even though I know he’s away providing for us, [it] still stresses me out.” 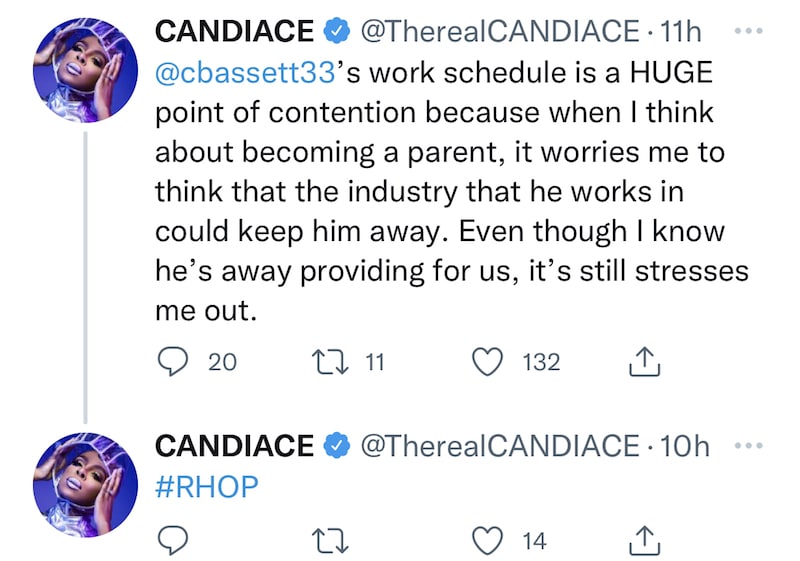 As for Chris’ seemingly annoyed demeanor at cast events, Candiace responded to a curious fan.

“Candiace and her husband walk into every party like they were screaming at each other in the car five minutes earlier,” the fan had said.

“Lollll. No. But [Chris Bassett] almost never wants to attend any all cast so he usually has an attitude,” Candiace replied. 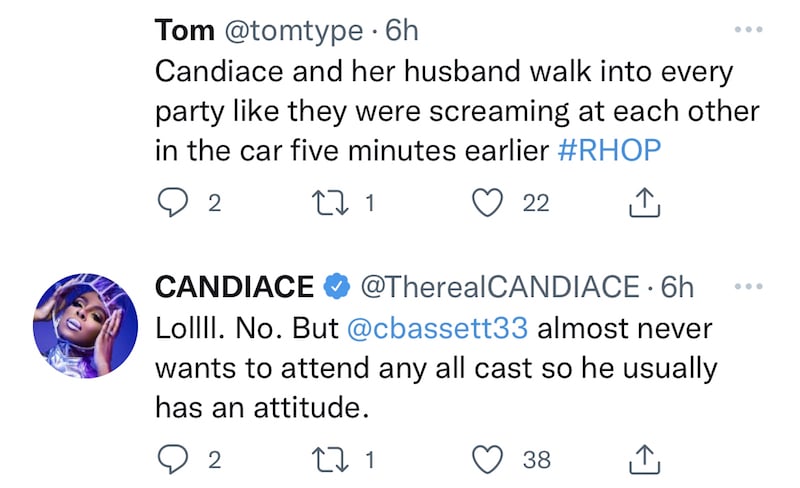 Also on Twitter, Candiace admitted that when it came to the start of her fertility journey with Chris, the two of them began seeing a doctor last year in hopes of conceiving their first child.

“We actually started the egg freezing process last year but I was apprehensive about starting the journey because… It’s a huge decision!” Candiace explained. “This year, I went in full steam ahead with my husband’s support! But Lord Jesus… It was a really intense journey.”

The Real Housewives of Potomac season seven airs Sundays at 8/7c on Bravo.