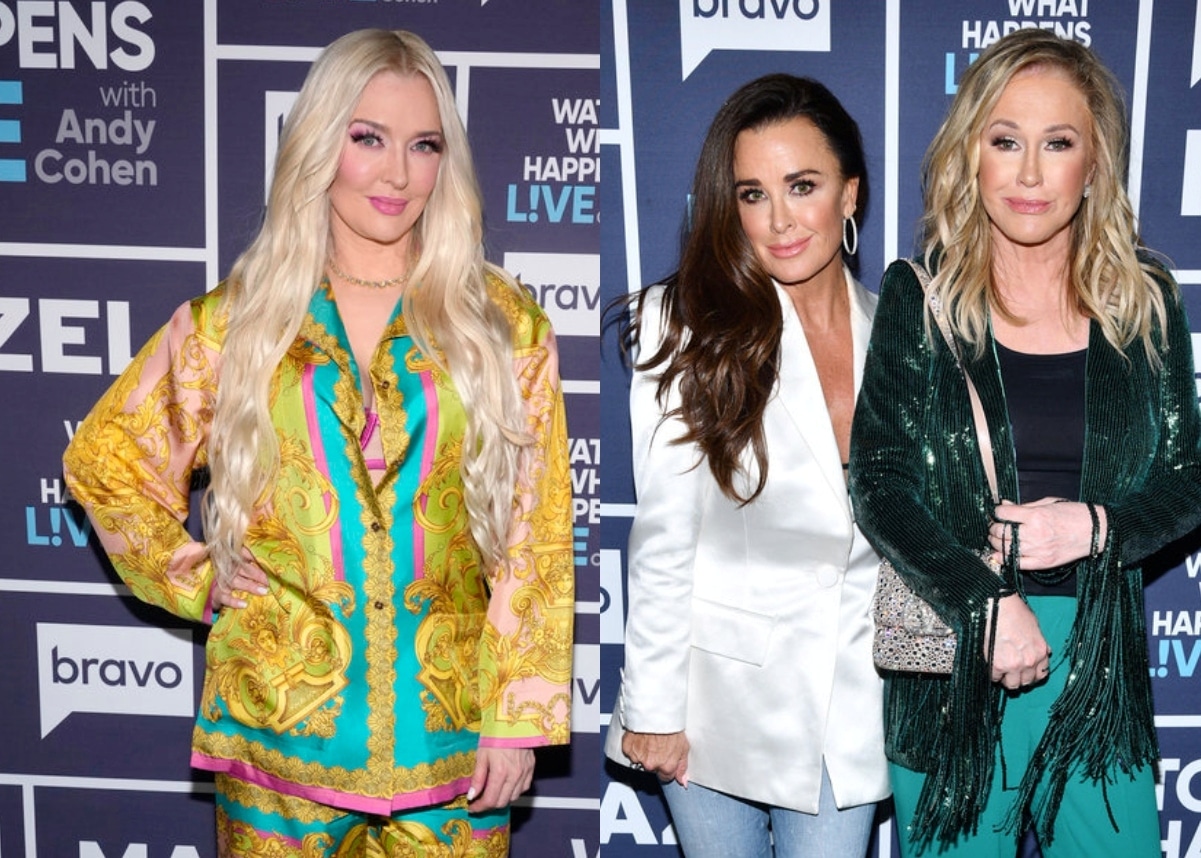 Erika Jayne is seen putting Kyle Richards in the hot seat during the Real Housewives of Beverly Hills cast’s finale dinner in a just-released deleted scene from the show.

As Kyle and the ladies discussed the details Lisa Rinna shared about her sister Kathy Hilton‘s meltdown in Aspen, as well as who may or may not have leaked the information to the press before the episode aired, Erika shockingly revealed that Kyle had told her off-camera that she was “glad” her sister had been exposed.

“I can just say when all of this was going down, Kyle said to me, ‘I’m glad that people are seeing this,’” Erika shared, as seen in a clip shared by Sarah Galli on Instagram.

And Kyle quickly cut her off, reminding her, “By the way, that was between us by the way, Erika. Thanks.”

“I did not know that,” Erika insisted.

“Yeah, that was in private. You get that right?” she asked her RHOBH co-star.

Understandably uncomfortable at that point, Kyle suggested that Erika and the rest of the cast were doing more harm than good when it came to her already-strained relationship with Kathy.

“If you’re doing this protect me, this is only f-cking hurting me,” she told them.

Also in the RHOBH deleted scene, Kyle was seen in a confessional, admitting that while she did say what Erika claimed she said, she did so coming from a place of hurt and anger.

“If I share something in confidence, I don’t expect you to share it with the group, and yes, I was relieved that someone else saw what I have to endure sometimes and yes, I did say that because I was very hurt by my sister and I was angry,” she shared.

Still, she added, “I don’t want [Erika] to share that with everyone.”

Amid the ongoing tension, Kyle admitted during a recent RHOBH: After Show that she was feeling torn between Kathy and Lisa.

“It’s really difficult because Lisa has always been a good friend to me, but then she had this argument with my sister Kathy,” Kyle said. “It’s now played out on Instagram, and all over the place, and at the end of the day, family is family. So it puts me in a very bad position, and then I sort of resent that because I’m like, ‘I always had a good relationship with these people, and now it’s been jeopardized.’”