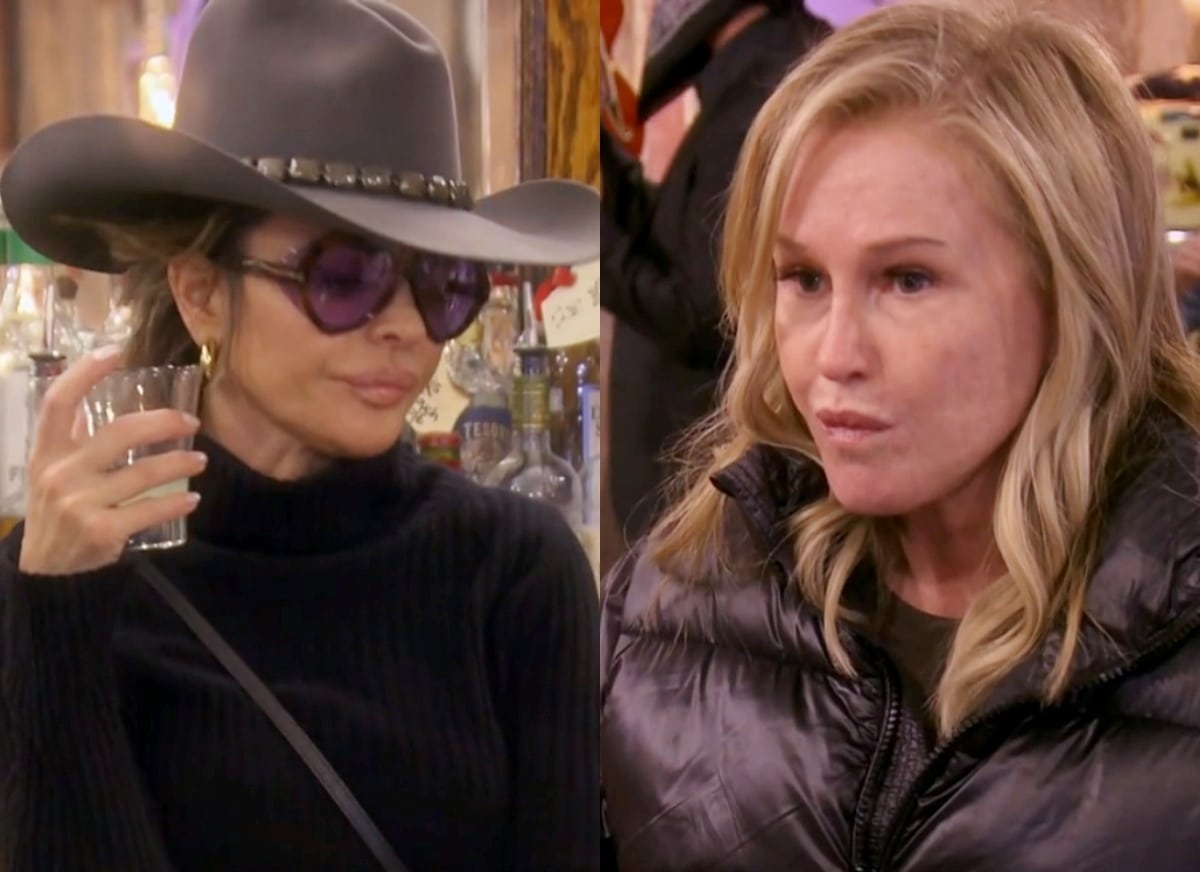 After a ROUGH night, trying to pick up the pieces and make the group whole again is going to be harder than ever.  On this episode of the Real Housewives of Beverly Hills, sides are taken, names called, tears are shed, and texts are revealed.  Just another day in the life for this crew…

Kyle claims she is “really tortured” about Erika’s behavior the night before and Rinna can’t fathom how it spiraled. Kyle doesn’t like that Erika kept calling the people “alleged victims” and it was evident that Erika was so defensive that none of the women could even reach her. Rinna tells Kyle that she told Erika that her behavior was unacceptable, but Rinna knows Erika is not going to do a damn thing about it.

Erika’s take on things? “The things being said about me are so gross…and I will not back down.” She tells Team Erika (aka Diana and Dorit) that she will only talk and do things legally and threatens to remember how each woman acted towards her when she was at her lowest, especially after the truth comes out.

Crystal, Garcelle, and Sutton are grabbing some coffee. Rinna and Kyle join the group. Kyle lets the ladies know that Erika packed up all her things at Kyle’s house and completely cleared out, with the help of Kyle’s supposed BFF, Dorit. Erika hunkered down at Diana’s hotel, along with Dorit.  And so begins the teams.

“It’s like, so chic!” Dorit and Diana are off to break the bank- I mean, go shopping. Funny that Erika joins these rich b*tches to try and keep up with the shopping spree.

Kyle is super excited to host the girls at a store called Kemo Sabe, where they will have drinks and buy personalized hats, a must-have in Aspen fashion.  She is hoping that all the ladies will be in attendance, but she has no idea that Erika is refusing.

Erika tells Diana and Dorit that she will not express any sympathy and she will not be around the group.  Erika even threatens to fly commercial home.  GASP! Erika repeats that “justice needs to be served” and she will fight for herself. She doesn’t think that friends should be questioning her. Diana attempts to HELP Erika dig herself out…and Erika refuses to grab on to the life vest. Erika then shares that the case was dismissed in Chicago and it’s nice to have that squashed, even though there are a lot of other cases to tackle.

Back at the coffee shop, Sutton tells the group that the Chicago case is the one that she was asked to be a third-party witness in. Interesting… Although this looks like good news for Erika, this case is getting moved to California and getting refiled, thus keeping Erika in the hotseat.

Sidenote: Diana, Dorit, and Erika (the mean girls) continue to be fresh when they don’t even allow Kathy into the store and pretend to not see the group walk by outside.  Rude.

It’s Kemo Sabe time and Kyle is thrilled to introduce the ladies to one of her favorite Aspen spots.  As they belly up to the private bar, Kathy is stoked to see they carry her tequila, which is no surprise considering Kathy tries to push it to the group any chance she can get (as she should).  Seems like Rinna has had enough of Kathy shoving her tequila down her throat and so Rinna does a big FU.  In front of Kathy, she tries the Kendall Jenner tequila- ya know, “her friend” (WTF)- but chooses not to have any of Kathy’s brand.

Kathy takes this extremely personally.  She is seeing red and talking smack.  After threatening to leave multiple times, Kathy angerly Irish exits and leaves Kyle is tears.  Kyle, who barely tried to help her sister out after getting screwed by Rinna, is upset, but it’s interesting that no one poo poos Kyle’s crying the way they do to Sutton…It only takes a few shots for the ladies to seemingly forget that Kathy left and that there’s a whole other crew that is refusing to hang out with them.

As Dorit, Diana, and Erika trapse around downtown, Erika cooly reports that the earrings she is currently wearing (yes, THOSE earrings) “were $790 and now they’re 1.3.” Erika has no chill. And it doesn’t help that they all cackle together over that statement.

Over some pizza, Dorit and Erika call themselves Diana’s refugees and Diana calls her hotel the “safehouse.” Dorit excuses herself to call Kyle and to let her know that she will not be coming to Kemo Sabe because… Erika doesn’t want to go. Sides are taken and lines are drawn. Kyle tells Dorit that it’s not cool that she’s not showing up and she is sick of getting her feelings hurt on this trip.  Kyle hangs up on Dorit and Dorit claims to be “blown away” by Kyle’s actions.  Dorit is perplexed as to why suddenly this has become teams, but honey, it is clear as day.

Suddenly Rinna wants to be Mother Teresa and makes things better within the group, even though she just caused a rift with Kathy.  Rinna decides to try and be the peacekeeper, so she leaves the hat store in an attempt to find the girls and bring everyone together. Rinna finds them, hears Erika state that she is “dismissed without prejudice,” and acts like the savior.  She plays “good cop” and proposes that the whole group come together for dinner.

Back at Kyle’s house, Rinna rolls up to report. Kyle is furious that these ladies didn’t show up to her private shopping event.  She calls Erika a “f*cking a*shole” and Kathy blurts out that it doesn’t feel good when people don’t stick up for you. Before dinner, Dorit comes to Kyle’s to try and make things better. Dorit claims she doesn’t want to be in the middle, and she is not choosing sides with Erika.  Kyle cannot believe that Dorit is still supporting Erika, but Dorit claims that Erika was “really upset- she was a broken woman today.”

Rinna enters the scene and tries to have the ladies “put a pin” in the bickering.  And then when Mauricio comes in, he actually talks some sense.  He reminds the ladies that this fight is all caused by an external party. And Kyle and Dorit hug it out before the bar.

Kyle arrives late to her own party and is trying to keep things together. When Erika and Diana enter, Kyle claims to feel uncomfortable. Kyle goes up to Erika and makes it clear that she never said Erika was guilty, but rather wished she would show empathy. Erika tells Kyle that she cannot go certain places and reminds her that this is not HER responsibility, but rather a LEGAL issue, not an Erika issue. This is, according to Erika, an inherited problem and she is tired of it getting thrown in her face, especially by her friends. When they leave the conversation hugging, it is clear that there is a double standard…because we all know how Sutton apologizing to Erika went down, right?

Crystal chats with Dorit and is not having it.  She still can’t believe everyone is blindly defending Erika, the woman who shows zero compassion for the victims owed money.  Dorit tries to stand by her bestie by saying, “My position is this, I don’t know all of the information, neither do you.” Ohh Dorit coming in hot, trying to stick up for her girl to the end, mainly because she just doesn’t want to be on Erika’s bad side.

When Rinna and Kyle make jokes about Erika’s last night behavior, it is making Sutton and Crystal disgusted.  They can’t believe that Erika always gets away with being a jerk and finally Crystal has had enough.  She tells Erika she doesn’t like the way she speaks to her and wants to know why Erika calls her an a*shole.  To that Erika retorts, “because you are.” Boom. Rinna wonders why Crystal chose to go *there* with Erika last night, but Erika tries to shut it down. She tells Crystal that she does not owe her an explanation and taunts that her case was dismissed. Hooray! Notice that Kyle stays quiet until she ends the fighting only because she wants to go to another bar.

You know it’s gonna be a bombshell when Bravo drops the black screen with the white writing.  “Later that night” on the way to the bar, Kathy worries that she may not get in because she is wearing sweatpants and that, my friends, is the last of what the cameras see.  “Several hours later,” we are slammed with text receipts.  Rinna appears to be the only witness in this Kathy Hilton meltdown.  Kathy’s text to Lisa reads, “silence is golden, I am staying silent.” WHAT HAPPENED…and wait, we are supposed to take Rinna’s word for this??