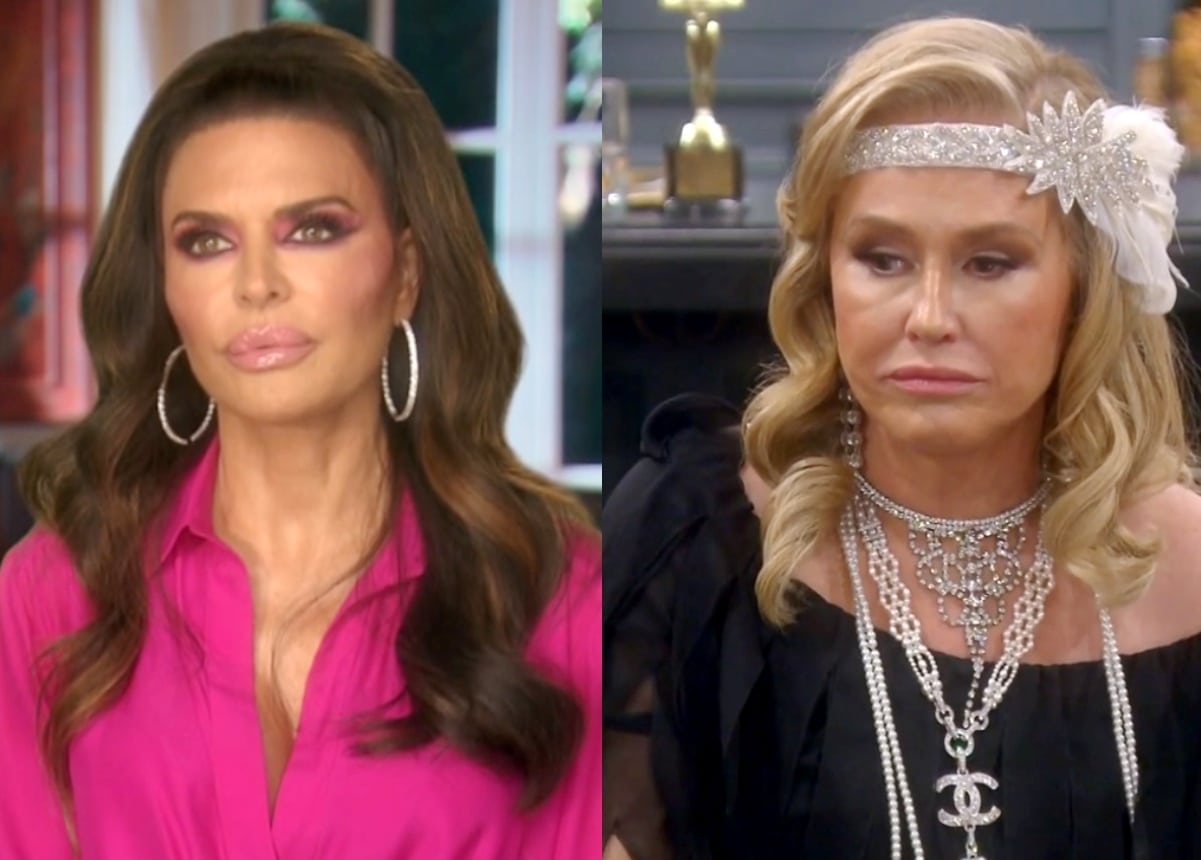 Foreshadowing is king on this episode of the Real Housewives of Beverly Hills. While out for the night in Aspen, Erika states, “Kyle wants to go to one more bar…what could possibly happen?” Evidently, a LOT can happen and as the old saying goes, there are three sides to every story: your side, my side, and the truth.

Everyone is busy packing up the next morning to head back to LA. Rinna explains that at the club the night before, Kathy was having an absolute meltdown. Rinna further states that she is not saying a whole lot because she is still in “shock” since she never expected Kathy to behave that way. She is rather vague, but evidently, it had to be pretty bad since Kathy won’t come out of her room and she is very, very upset.

On the plane ride home, Erika and Sutton appear to have a moment (again).  Erika tells Sutton she does not want to fight with her anymore and Erika claims she wants to connect on a “human basis.” She apologizes for her behavior, and she is actually being real with Sutton for once. And there aren’t even pigs flying and the plane isn’t crashing- Erika just suddenly has feelings?

Kathy is not on the plane because, according to Erika, she had a “breakdown at the nightclub.” Sutton states that Kathy was a “little off” and she kept asking everyone to do the Conga line. Sutton remembers Kathy saying, “If you don’t go home with me, you are not my friend.” Diana explains that she saw Kathy raging and screaming at the girls, but mostly at Kyle. Rinna stepped in to take Kathy home and according to Rinna, Kathy lost it.  Kathy stated she will “take down the show single-handedly” and she will “ruin” all of the women. Kathy jumped on her glasses and stated she would “destroy Kyle and her family if it’s the last thing she will ever do.” Wow. But let us not forget that Rinna DOES lie from time to time…hello, Sutton and charity event table?? Let me just say one thing…couldn’t the women just have done the Conga line with Kathy?!

Kyle explains that she was reading the play-by-play texts Erika was receiving from Rinna and she was just blown away.  In her confessional, Rinna goes on to say she believes that Kathy is holding onto anger over the Agency and American Woman, and it might be hard for Kathy to feel outshined by Kyle. (Last time I checked, Kathy is doing JUST fine, but I digress).

Back home, the women are prepping for Crystal‘s upcoming 39th birthday party: a roaring 20’s theme!  Crystal visits with her husband and they discuss her party (that her husband seemingly forgot about). She has high hopes that the women will not ruin her big day, but it’s not likely this group will be able to keep it together.

Kyle is unable to go to Crystal’s party but is worried that since she has not spoken to Kathy since Aspen, they may be heading right back to that bad place again.

Dorit and Erika meet at a modern-day chocolate factory to lift Erika’s spirits and get her mind off of her woes.  Dorit claims this is therapeutic and fun, but it’s also a chance for them to talk sh*t. Erika says that after seeing Garcelle‘s segment about THE earrings on The Real, she has a big problem with Garcelle.  Erika believed that Garcelle played “semi-nice” with her on the Aspen trip and is annoyed Garcelle didn’t even give Erika a heads up.

Dorit throws Kyle under the bus for worrying what the neighbors will think by being friends with/supporting Erika even when she is not showing compassion for the victims.  Erika scoffs at that and states, “Sometimes the ones who are, ya know, doing the best, are hiding the most.” Fighting words by Erika.  She does not appreciate that Kyle has conversations about Erika’s behavior, considering Kathy’s recent meltdown. Interesting that Erika is deflecting onto Kathy…what did Kathy ever do to HER?

The ladies are getting ready for Crystal’s party and Sutton shares that she DOES have an authentic vintage 1920’s dress (of course she does). Sheree gathers at Garcelle’s before the event and manages to sign her name on Crystal’s card from Garcelle. LOL. Garcelle catches Sheree up on The Real segment and states that she hasn’t seen Erika since Aspen.  Tonight should be interesting considering Garcelle still strongly believes Erika should give up the earrings.  Garcelle decides she is not even going to say anything…unless of course Erika brings it up.

Grand entrances are made by the group, but of course Rinna makes it about her and claims it is hard to get past what she went through with Kathy, but nevertheless, she has shown up.  She states, “I am putting on a brave face because I feel PTSD.” Ha- member when she threw a glass? Suddenly, Rinna has gone soft.

Kathy does show up to the party and the whole mood changes as she makes her entrance. Rinna is in a state of shock seeing Kathy, who apparently is acting like nothing ever happened. Rinna dodges Kathy to the best of her ability and she calls it “excruciatingly difficult” to watch Kathy.  Rinna calls Kathy’s meltdown “f*cked up on every level.”

Even though things are falling apart with Rinna and Kathy, it’s going well between Erika and Sutton.  Erika talks all about her old home and how she drove by it for the first time since she left. She realizes that the house was never hers and she is trying her best to close that chapter of her life… Wish Erika would give up those earrings the way she gave up on that house.  When Garcelle gets questioned by Dorit about her opinions on The Real, Garcelle reminds Dorit that the show is her JOB and she is paid to talk about hot topics.

Rinna has decided that she needs to go since she is still so upset about what happened in Aspen.  She states, “I feel like I have seen the devil and her name is Kathy Hilton.” DRAMA QUEEN. Rinna is certainly dragging this out and dragging Kathy along for the ride.

Meanwhile, Erika tells Garcelle she would have loved a “heads up” about The Real.  Erika attempts to keep her voice even and calm (although frightening) and thought that she has a nice connection with Garcelle in Aspen.  Garcelle does not falter and reminds Erika that she is supposed to discuss hot topics, one of which focused on Erika Girardi and her extremely expensive earrings that she will not return.

An upset Crystal returns to the group and reports that Rinna told her “she is quite shaken up by what happened in Aspen” and Crystal further states, “I don’t even know what that means.” Kathy thinks Lisa left early because all of that she has been through with the loss of her mother.  Kathy continues to say that Rinna was “a sweetheart” who “listened” the night of the meltdown and says that if she was the “toe that broke the camel’s back” for Rinna, she apologizes.  Kathy has no idea what she is in for.

Erika and Diana are told to go call Rinna and see what is causing all this angst.  When Rinna does not pick up, Erika explains that she thinks Rinna is mad because she feels like some behavior gets swept under the rug. Erika believes that Rinna should tell her side of the story to the group so everyone can better understand why she is so upset.

Diana explains that the Kathy she knows is very put together, but the Kathy in Aspen was raging. Erika states that all Kathy has to do is apologize for her behavior in the nightclub since the whole group saw it, but Rinna staying quiet, well that has “everything to do with Kathy Hilton.” Diana calls Rinna a chicken for not telling her side of the story (yes!) and reminds Erika that she doesn’t know what actually went down

As the party winds down, Erika holds Dorit back as the other ladies exit. Wait- I thought Dorit had to get home to her kids but suddenly it’s not a rush now that she is busy sh*t talking with Erika? Erika lowers her voice to an ominous, soap opera tone and slowly and deliberately walks Dorit through what she knows about *that* night.  Erika states that Rinna left Crystal’s because she took Kathy home and things got worse in the Sprinter. Erika claims she doesn’t know why anyone is afraid of Kathy Hilton and says that it’s Kathy’s turn in the hot seat. Dorit is worried about Kyle getting the brunt of this. But maybe it’s time for Rinna and Erika to stop getting in between families and dragging others down…