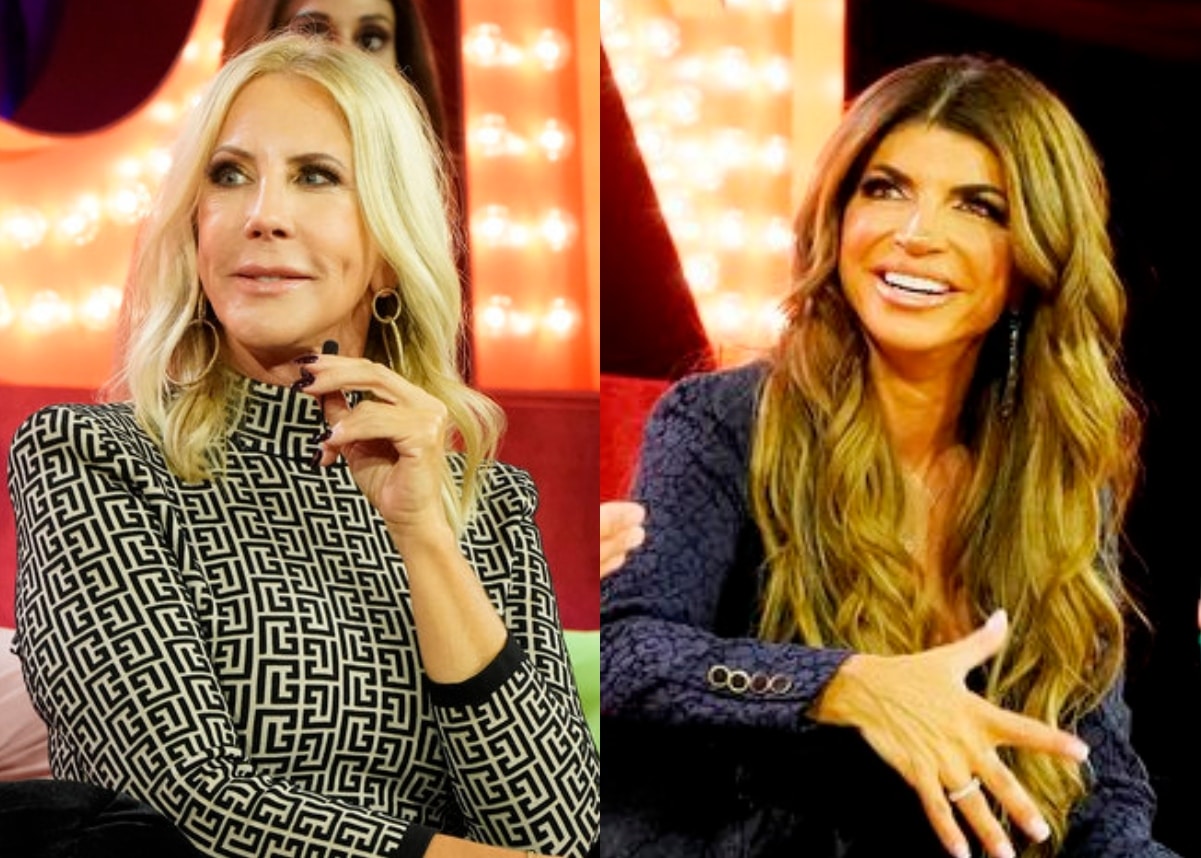 Vicki Gunvalson was featured on the “Right the Relationship” panel at BravoCon on Friday, where she shaded Teresa Giudice as “overrated.”

Before appearing at Andy Cohen‘s Legend Ball later that night, where she faced off with both Ashley Darby, who labeled her as the “rudest” Bravolebrity during a recent episode of Watch What Happens Live, and Kenya Moore, the Real Housewives of Orange County alum threw some shade at the Real Housewives of New Jersey cast member.

“I’m going to say Teresa [Giudice],” Vicki replied after being asked about the most overrated housewife, as noted by PEOPLE. “It’s not that I don’t like Teresa, I just think, you do a bad thing, and you go to jail, and you still carry on a TV show? I just can’t believe it. I mean, she just keeps making more money and more money and more money, and it’s hard for me to understand.”

“I like her, but I don’t get it,” she added. “I actually did vote for her on Dancing with the Stars, because I’m a Housewives supporter. I like her, I just think she’s overrated. It’s a lot.”

PEOPLE also noted that on a separate panel, the RHONJ star reflected on her 11-month jail sentence, saying she was “used as an example” and claiming she “probably wouldn’t have gone to jail” if it weren’t for the show.

Regarding Ashley’s claim of her being the “rudest” Bravolebrity, Vicki explained that she didn’t know who the Real Housewives of Potomac cast member was when they first met and wondered why Ashley was “making a big deal of it.”

During the same interview, Vicki noted that she and Dorinda Medley are “fine,” noting that while the RHONY alum was “not nice” to her during the filming of Real Housewives: Ultimate Girls Trip season two, she understands that she “had a lot of stress at her house.”

Also on Friday, during BravoCon’s Andy’s Legends Ball, Vicki was featured in a “Squash That Beef” segment, where she further detailed her drama with Ashley.

“I was told I was gonna do an interview with a Housewife, and when I walked into the interview room, I had never met Ashley. I didn’t know what show she was on, and I was kinda like, ‘Where’s the housewife?’” Vicki recalled, as seen in a video shared by Best of Bravo on Instagram. “That’s the truth.”

But Ashley wasn’t having it and yelled back, “This is the case in point why this is a problem, Vicki. You were very dismissive for no apparent reason. The panel was called ‘Housewife to Housewife.’ Why didn’t you ask who I was?”

According to Vicki, she did ask “after a while.”

“I will apologize. Because now I know who she is, but she knew who I was,” she stated.

But Ashley wasn’t the only housewife who took issue with the RHOC alum during the panel.

“I, too, have a ‘Vicki is a monster story,’” Kenya proclaimed as she got out of her seat and walked to the front of the stage. “The first time I ever met Vicki, she said to Melissa Gorga, who was there in Las Vegas, Jill Zarin, who she treated horribly, and told us that none of us would be there if it were not for her.”

“We’re all really sisters. This is a sisterhood. No one of us is more important than the other. We’re on the same platform,” the Real Housewives of Atlanta star continued. “So Vicki, check yourself before you wreck yourself.”

“I never said I was more important,” Vicki clapped back. “I said the facts of our show, [if it didn’t have] a successful season one, two three, [it] probably wouldn’t have gotten other franchises. That’s it!”

Following Ashley and Kenya’s statements to Vicki, Teresa took the mic and questioned Vicki about her prior interview in which she shaded her as “overrated.”

“I said you are very nice. We don’t know each other very much. The question to me was, ‘Who is the most overrated?’ I just was in a place of like, ‘I like Teresa. I’m happy for,’” Vicki explained. “I said complimentary things. Did you hear that, too?”

“We definitely filmed a little scene. I’m going to be doing a little cameo—one or two times—that’s it this season,” Vicki told E! News. “It was good. … I love it because a lot of people on the crew I had for all those years are no longer there. But there were some same people, so it was good to see them—a cameraman and a producer.”

The Real Housewives of Orange County season 17 is expected to premiere on Bravo sometime in early 2023.