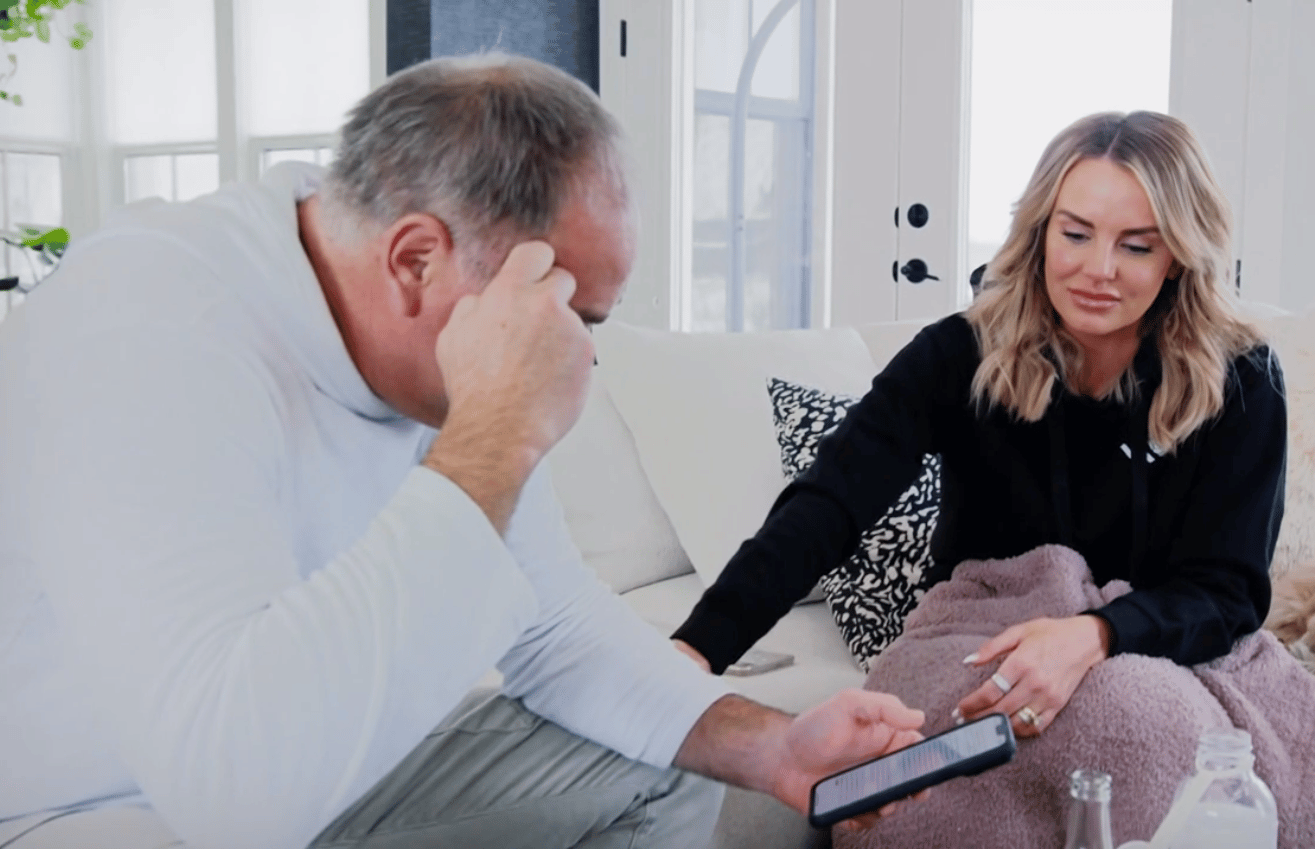 You may have thought you tuned into the wrong show during the introduction to The Real Housewives of Salt Lake City, much like I did, but it was just Bravo trying something new…that they should never do again. This episode has enough surprising moments…Heather‘s starting a choir! Whitney‘s husband gets fired! And we find out that Angie Harrington’s husband is an internet troll!

Heather pops into the theater to discuss the set-up for her choir.  Yep, you read that right.  Heather has started a choir to “renew her soul.” We get to meet Cory, the Southern Baptist choir director, and Heather reminds us how great it is to sing songs with friends, something lacking in her life since removing herself from the Church. Auditions are right around the corner, just in time to sing some Easter hymns.

Jen and Coach are out for date night…at Altitude, the trampoline park…made for children.  Jen looks like she saw a ghost when she realizes where Coach brought her, but she does lighten up enough to bounce around and jump in the pits. Jen takes a moment to thank Coach and they discuss the Shahxposed Instagram account.  This account was saying bad things about her and Lisa—like Jen really needs this two months before she is set to go to trial. She explains that, according to Lisa, Angie H.’s husband, Chris, is the one who set up the account. Jen feels like she needs to get to the bottom of this since Angie is now inching her way back into the group.  She feels “humiliated and disrespected” by the use of her last name in the account and wonders what she did to be trolled.

Here’s Lisa again, putting pressure on her oldest son about college.  Jack claims he gave college “some consideration,” but Lisa believes Jack has a “false sense” of reality. Even though Jack started Fresh Wolf three years ago (with the help of his parents), he shouldn’t think he is Bill Gates. Lisa is satisfied with Jack’s baby steps about the college convo (aka him saying what Lisa wants to hear so she gets off his back).

Whitney walks us through a big change in the Rose household. “It was a Monday.” Whitney explains that Justin was fired, and she can hardly wrap her head around how they are going to keep their lifestyle up without his paycheck.  Justin wants to post about his recent firing and he becomes emotional talking about the past 7 years of his career. Whitney explains that Justin was the OG of his industry, and that it was crazy that he was let go.

Justin claims that his firing was because “Whitney was a public figure” and it seems as though Justin’s company is posing the firing as a conflict of interest. If you ask Whitney, she believes that their actions on the show, particularly the Love is Art scene from last season, might’ve been the straw that broke the camel’s back (so cringe), but it may be because Whitney’s beauty brand is truly a conflict of interest to his ex-company.  Whitney refuses to feel guilty for her behavior and sees the company trying to control their employees and actions, much like the Church. Although she worries about Justin (kinda), she seems mainly concerned about the lack of income.

Over at Beauty Lab, Heather discusses how business has never been better. The second location will be opening at the end of summer (hopefully) and Heather states that she is overwhelmed and scared to lose it all. Her book is stressing her out the most. Heather has missed every deadline and explains that she is simply panicky.  She feels like her “own advocate and a traitor at the same time.”  Heather is having a hard time figuring out her “new identity” and was seeing so much progress with her cousins’ acceptance of her new life.

However, Lisa helped this situation take an ugly turn.  Lisa tweeted Heather’s father’s obituary in a dig at Heather to show she was correct about the timeline.  If you recall, according to Heather, Lisa sent Heather a text saying “I hope your dad is feeling better” after Heather’s dad had already died.  By tweeting the obituary, Lisa is showing that her father was ALIVE; however, Heather explains that her father was on hospice at the time.  Therefore, she did not appreciate Lisa’s text.  According to Heather, her family saw this messiness and is now pulling away from her again, afraid of what else may be exposed in her Heather’s book.  Heather is not happy with Lisa and says, “I hope that her being right in this moment is worth it to her cuz I feel like she has lost me forever.”

Whitney and Lisa meet up for a yoga session, even though Lisa wishes they would instead drive through Taco Bell for a hangout sesh. Whitney fills in Lisa about Justin’s current job situation and explains that Justin was “faced” with the choice. Lisa suggests that blessings come out of hardships.

Lisa shares that her week has been crazy.  She states that negativity has been coming her way since retweeting the obituary and that she simply just wanted to set the record straight.  Lisa admits that she went about it the wrong way, but only intended to clear her name of this Heather mess.  Lisa thinks that by showing up to Heather’s choir try outs, they may be able to smooth things over.

Meredith finally shows up in this episode …and with Angie H. to boot!  It’s a double date, ya’ll. Meredith is willing to start a friendship with Angie, especially now that Lisa is out of the picture. It’s cool that Angie just finds whoever doesn’t like Lisa at that point and clings to them/uses them as the in. Angie states that she did discuss rumors about Lisa in PRIVATE with Whitney but claims she would not say anything about sexual favors. Angie’s husband, Chris, shares that he experienced hate from Lisa’s husband, John, and then he drops a bombshell.

Since Chris felt frustrated that Angie was getting attacked online, he confesses that “In a very immature moment, I created a fake account.” Messy, messy. He further says, “There’s no manual to defend your wife on social media,” as if that makes it better.  Meredith, although slightly disgusted by Chris’s actions, shares that Lisa has also been trolling, so it’s time to just move on. They are now even.

Heather stops over Jen’s house and Jen spills.  She tells Heather that Chris started the Instagram page Shahxposed and only tells her now because she didn’t believe it at first when Lisa told her.  Chris actually called Jen to apologize, and he told Jen he called the account Shahxposed only because it was “available, so he took the name.” Jen was shocked to hear that Chris was behind the trolling and wants Heather aware of who Angie is. Heather is torn and does not want to be in the middle of this mess, but also cherishes her friendship with Angie…

Heather’s choir try outs are about to be underway and she is taking it VERY seriously.  I mean, she has a panel of judges. Jen, I am with you- “I was expecting American Idol. There’s five people and four of them are like, related to Heather.” Watching Whitney and Angie roll up in their matching fringe dresses is absolutely cringe. When Jen, the Ryan Seacrest wannabe, goes out to the line and sees Angie there to audition, she gets rocked.  Jen is annoyed by Heather because they JUST had the conversation about Shahxposed!  Does Heather not realize Angie’s character?  Or does Heather just not care…